First traces of human literature dates back to 4700 BCE. However, there is no trace of construction of Sphinx. It's said that ancient Egyptians of the first dynasty found Sphinx and later built the three pyramids to be superior. The great Sphinx itself aligns perfectly from west to east. Like every other pyramid, there used to be an entrance to the lion pyramid, as well. And, even after years and years of research, we haven't yet found the entry. Sphinx is an ancient untold mystery, possibly the one that humans can never solve.

Here are the reasons why humans couldn't have built the Great Pyramids of Giza:

Each stone is carved from granite rock in a shape, perfectly cuboid. Also, to carry those stones from the quarry to the construction site, workers had to cross the Nile. It's impossible for a human to move a 1000 tonne stone and cross the river carrying it. Even if it were a group of humans who brought the rocks across the Nile, it still seems practically impossible.

All the three great pyramids of Giza face the exact North. The other three sides of the great pyramids face precisely East, West and South direction which means that when they built the pyramids, they had some sort of directional assistance. What's surprising is that there were no compasses, back at the time. How did the Egyptians calculate directions without an outsider's help? The question still baffles our mind.

3. Alignment of the three pyramids

4. Alignment of all historic sites around the globe 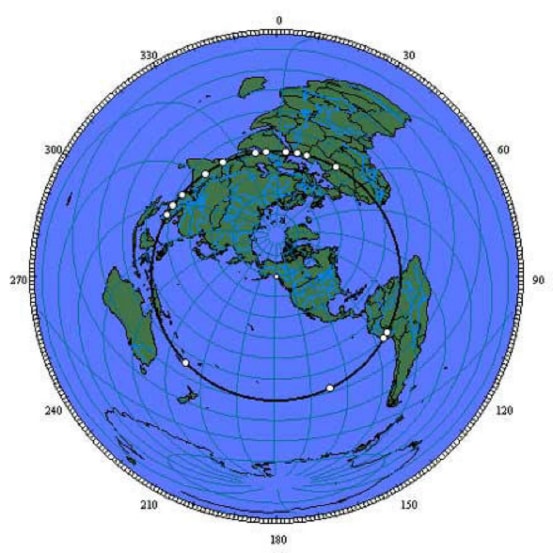 Have you ever tried to connect every ancient civilization sites to each other on the globe? You will find that each of them follows a strange perfectly circular pattern. It depicts as if they were established around the north pole on a circular path.

It is doubted if prehistoric humans had any contact with people on other continents at all. Even if they were connected, the accuracy found in calculating the distance between different archaeological sites doesn't stop to surprise us. Observations that have been made about the distances are as follows:

If you say that it doesn't boggle your mind, you're probably lying. Humans of the 21st century haven't thought of doing that. And, even if they did, some or the other government would have a problem with the concept. On the other hand, builders of the ancient pyramid seem to follow the pattern, even though they were wholly alienated from what was happening in Meluha.

Got your mind boggled or is it the beginning of new existential crisis? It's very likely for one to feel that way. There are a lot of truths which are just out there to be found. Read about history to gather all the information. For years, history too has been twisted according to human's comfort. You can still find your answers by focusing on the history's loopholes. Liars that wrote it seems not to coordinate with each other while writing a book. That's where you'll find your answers.

While you are busy deciphering the history from the history books, your assignments stay pending. If you are not going to write them on your own, assign them to Assignment Desk. We help you by writing your assignments entirely. We also offer free revisions and edits. Our writers excel at assignment writing task.

Here are some of the best history assignment writing tips for you.