Accounting is considered as the procedure of analysing, classifying along with summarising information related to finance. It helps in revealing profit and loss for a specific period of time and the value as well as nature of the assets and liabilities of the company. This financial information helps the organization in taking decisions for the future growth and development (Palmer and et.al., 2014). This report is based on the Inditex group which is one of the biggest fashions group as this firm has more than 7000 stores in 91 markets around the world. Further, the report helps in providing clear understanding of financial performance of the stated group along with the different strategies of growth which the organisation pursuing in

In terms of the financial performance of the Inditex Group, it helps the company in taking financial decisions (Kaplan and Atkinson, 2015). Further, there are different types of strategies which are created by the organization for achieving goals and objectives in a specific period of time. 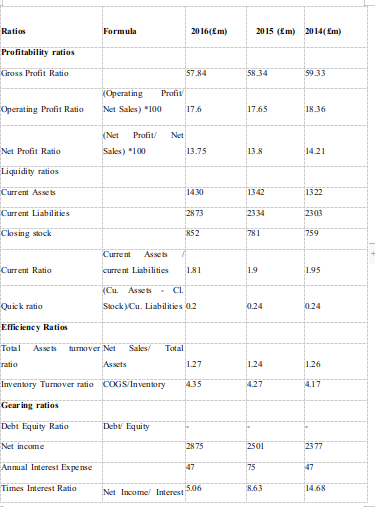 Gross profit can be termed as that profit which is earned by the company after deducting the cost that is related to selling of products. On the basis of present study of Inditex group, in which the ratio of gross profit is analysed of the past three years. Further, the gross profit for the year 2014, 2015 and 2016, every year there is decrease in ratio of Inditex Group which shows that the company is required to improve their level of performance (Collier, 2015). The stated business in not able to control their cost of production and the gross profit ratio also helps in comparing different competitors in the marketplace. Furthermore, it also provides appropriate pricing information of company along with the structure of cost.

It can be termed as the ability of the organisation for meeting financial obligations which are due along with this its calculation which can be used for measuring the ability of firm in order to pay the short terms debts. In context of Inditex Group, there is decrease in quick ratio which shows that the company is high which is based on the different types of inventories along with the assets for the payment of short term liabilities (Hartman and et.al., 2014). Furthermore, it can be stated that in the year 2014 and 2015, the quick ratio is stable which indicates that the company have appropriate cash in hand for solving various types of issues.

It is considered as another liquidity ratio that helps in measuring ability of company for paying its short term as well as long term obligations. On the basis of present case scenario of Inditex Group, in the year 2014, the current ratio of the company was 1.95 that is more than 1 which shows that it is considered to be satisfactory situation them but at the same time it is not acceptable for the company (Hartman and et.al., 2014). It provides an idea to the company for the purpose of operating the level of efficiency. In addition to this, there was moderate current ratio in the year 2015 and 2016 for Inditex which helped them to attract large number of investors which can further aid in the growth and development of the organisation.

It is an analysis in which the organisation use their assets and liabilities and it also helps in calculating receivables turnover along with the repayment of the liabilities. In the context of Inditex Group, total asset turnover ratio aids in analysing the ability of the company for generating sales from their assets by comparing net sales with the average of total assets. Further, there is an increase in asset turnover ratio which shows that the company is making effective use of assets for the purpose of generating sales. It helps the investors in taking appropriate decisions related to make investment in the company (Humphreys, Gary and Trotman, 2015).

On the other hand, inventory turnover ratio can be defined as the manner in which the inventory is managed by the organisation by comparing the cost of sold goods with the inventory in a specific period of time. In case of Inditex Group, there is increase in the ratio on the basis of last three years as it indicates that the organisation is having an appropriate liability and it is also considered as unhealthy which shows the level of investment along with the return rate which is zero. In this, it shows that either it can have appropriate sales or inappropriate buying (Betsch and Haberstroh, 2014).

The net income of the company can be termed as total earnings which are calculated by the company in terms of revenues and it is subtracted from the cost which includes interest, depreciation and taxes. In the context of Inditex Group, there is an increase in the level of net income in the year 2014 to 2016 which shows that the performance of the company is going good and is profitable for the organisation (Kaplan and Atkinson, 2015).

Growth strategies can be defined as the procedure which can be used by the company for expanding the business. In the context of Inditex Group, the main focus of the organisation is on expansion as well as market development in which the organisation sells their existing products in different markets of the world. There are other competitors present in the marketplace so that the stated organisation is not getting a proper level for the growth and opportunity. The stated group has flagship store which is Zara and after that they owns different chains such as Oysho, Pull and bear along with other various stores. In the past few years, there is growth in the market expansion of the company as they also started their online business which is beneficial for their growth and expansion. Further, with the help of this strategy, it provides an opportunity for selling the products to large number of people. In context of growth, every year there is increase in net income of Inditex Group which shows the level of performance each year which is considered to be profitable (Carlon and et.al., 2015).

In addition to this, by using market expansion strategy at Inditex Group, it helps them to expand their market in different areas of the world. It also encourages the firm to expand their business over the internet so that people can easily purchase their products at a high level. Apart from this, the company has expanded their business in different countries such as UK, Argentina, Israel, Germany etc (Collier, 2015). At the initial stage, the firm launched Zara Home which is an online store and join the e-commerce market. This assisted the organization in attracting large number of customers from all over the world. Through this, due to increase in trend of online shopping Which increases the level of profit for the company. Thus, it can be stated that there is an appropriate level of growth is achieved by organisation.

From the above carried out research, it can be inferred financial analysis has been carried out for Inditex Group which helps in describing their performance over the last three years. This report is also helpful in understanding various financial aspects that provide appropriate information which is required in taking decisions of the company. Further, it can be concluded that there are some of the growth strategies that are adopted by the firm for expanding their business. It includes mainly market expansion strategy that assists the company in selling their existing products to different number of people or in other countries. It can be summarised that there is an increase in level of growth from past few years and further, they have also expanded their business by selling the products online. It helps the group to attract more people which are considered to be beneficiary for the organisation. Thus, it can be stated that there are different types of financial decisions are required to be taken for achieving the goals and objectives.