The term tax gap refers to amount of difference arise between income generated by government though various tax revenue under tax system and amount of tax actually received by government. This amount of tax gap is expressed by tax reduction system or optimisation arrangements. However practically it is difficult to determine a fix or certain interval of tax gap. Such gap is result of tax avoidance and tax evasion and countries across the world are dealing with this issue (Khwaja and Iyer, 2014). For example in UK, aggregate tax gap during 10 year from 2007 to 2017 was approx £325 billion.

2. Explanation about “Tax Avoidance” and “Tax Evasion” and persistent and aggressive Tax Avoidance Scheme or Arrangements:

There are several tax avoidance and tax evasion scheme which HM revenue and customs (HMRC) has started to crack when a large number of cases involving some well known personalities came into picture which they called K2 scheme. This scheme involved companies which open an off-shore branch. In this scheme the employee resign from his job and after some time get rehired by these offshore branch which basically have no assets or operations, for a lesser salary. Then the company give employee a huge amount on loan, which reduces the amount of tax payable. The second scheme which the companies use to avoid tax is VAT Supply Splitting. In this scheme the customer splits there single order into different small orders which results in the lower VAT rate applied to each order (Rogoff, 2017). The HMRC consider it to be a tax avoidance scheme and technically legal. The commonly used way to get tax benefit is opening an off-shore accounts. The European Parliament has implemented the fourth legislation which will require that all the multi-national companies has to report their financial data form various countries in which such companies are operating. This scheme of tax avoidance came when document was leaked from 2016 which had the report and financial details of approx more than 200,000 off-shore accounts known as Panama Papers. Individuals in order to avoid tax make arrangements by using deductions like tax bracket for married couples, personal allowances like marriage allowance and other tax reliefs. Also individual make manipulative disclosures to obtain additional deductions and tax relief. 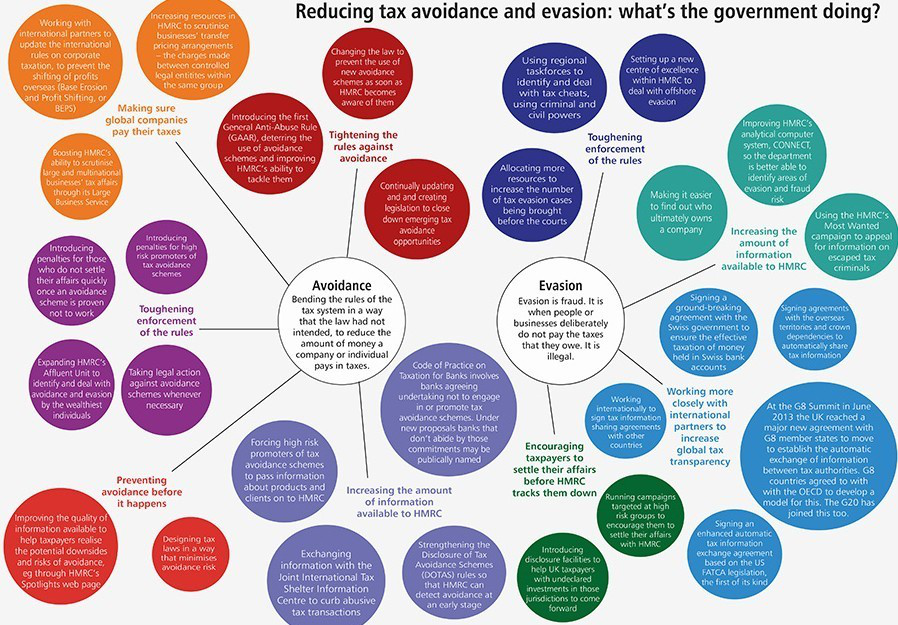 During recent year, UK's Government has taken several steps to avoid or minimise tax evasion and tax avoidance. In series of these steps government has outlined approx 21 measures to reduce the tax abuse. In UK amount of tax gap has been reduced to 5.7 % in 2016-17, which is lowest in five year and considered as remarkable achievement although there are improvement required. Beside this government and HMRC is plan to raise £240m tax from VAT by tightening and imposing strict regulations in VAT collection system, and also issued a notifications and circulars regarding imposition of higher penalty on late deposit and avoidance of tax. But some times these steps hurts the sentimental of small traders so government should determine grades to bifurcate penalties. In UK government makes amendments in laws to stop the use of new arrangement of tax avoidance as per reports provided by HMRC.It also make initiations to investigate more into large business for this government continuously expanding the powers of HMRC to identify and deal with such affairs.Government is going to sign a important contract with Swiss government to ensure that deposited income in Swiss bank are not black money. Government is promoting tax payers to settle their accounts and unethical acts before HMRC trace them. In finance act a big step towards empowering DOTAS rules taken, which leads to detection of tax avoidance at initial stage and its main focus id towards promoters to govern corporates. As per rules provided under DOTAS a scheme is framed which covers promoters and corporates which restricts company and promoters to get claim relief for reflective monetary losses on disposal of shares and relief on intellectual property. Due to these rules companies are not able to make multi layer investment through subsidiaries to avoid disclosure and reporting. Act also imposed penalties on rogue operators as a safeguards of waste management sector, these penalties restricts them to operate illegal landfill sites (Finance Act, 2018). On other hand for individuals in UK, DOTAS (disclosure of tax avoidance schemes) are introduced by government which contains various rules regarding a systematic disclosure of tax avoidance arrangement applied by individual concerned with taxes on income, national insurance contributions. taxes on capital gain etc. Beside this its also provide a clear views on definition of promoter for dis-closable arrangement of tax avoidance to make a appropriate disclosure in this regard. Therefore from above discussion it is clear that effective steps are taken by government to minimise tax avoidance and evasion, however there is improvement required to make these steps tax payer friendly. Coursework help available at Assignment Desk

From above report its has been articulated that tax gap is major issue before UK's government and such gap is result of tax avoidance and tax evasion. Taxpayers whether individuals or corporates always tries to reduce or minimise their tax amount payable and develops new ideas and way to tax avoidance and tax evasion. So government should track these such new ideas and ways and make changes in regulations to reduce tax gap. HMRC' s current steps are impressive and it tries to frame potential steps while considering previous cases and circumstances.