This presentation is going to highlight the main role of fiscal and monetary policy of UK as well as its impact on economy. Business environment includes all internal and external information which affect activities of a company like economical policies.

Fiscal policy refers as a means by which regulatory bodies of a nation regulates and adjust tax rates, spending levels and more. The main purpose behind such adjustment is to monitor and manage country's economy. In another words, fiscal policy can also be defined as taxation level to influence the economic growth rate. According to theory of economics, government of a country influences macroeconomics  level of productivity either by increasing or decreasing public spending and tax levels. In turn, this will cause curbs inflation which is considered as healthy if it lies between 2% to 3%. Moreover, this will also aid in increasing employment as well as maintaining a healthy value of money. 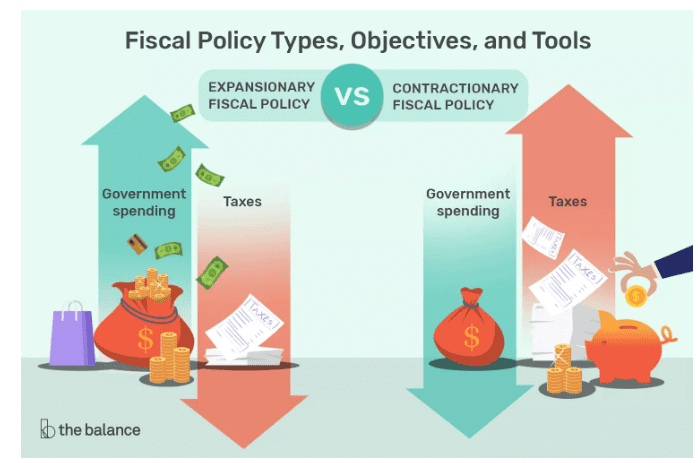 Fiscal Policy is generally found under two types that are- Expansionary and Deflationary.

In context with UK, as this country is considered as one of the top developed nation due to stable economic condition.Some major roles played by fiscal policy in the development of economy are given as below:-

Development of Private Sector: In a developing country, private sectors play an important role in improving condition of economy. The production and productivity of such sectors are majorly influenced by fiscal policies like taxation, public spending and more. Tax relief, subsides and rebate are granted for boosting up operational activities of private sector. Moreover, fiscal tools and measures are also used to activate capital market for ensuring the availability of proper resources in private sectors.

Optimisation of Resource Allocation: Fiscal tools can also be utilised for effecting optimum resource allocation. As in private sectors, adequate resources are often directed towards production which cater the major requirement of high and richer section of society. Therefore, fiscal tools may be employed for allocation of mobilised resources in desirable investment channels. This will turn resources to social lines of production from less useful production of private sectors. In this regard, reallocation of resources can also be done through different incentive measures and subsidy programs.

Creation of Social and Economic Overhead: Proper basic infrastructure is the vital requirement for economic development. It includes provision of social overheads such as health and education services, transport and telecommunication facilities, power generation etc.. It will help in enhancing living standard and productivity of human beings as well as speed up process of industrialisation. Since building and developing such infrastructure need lump sum amount of investment which cannot expected by private sectors. Therefore, governmental bodies have to arrange such investments. So, they acquired this through fiscal measures of expenditure programs and taxation.

You can also read How European Monetary Policy Affected their Recovery

Monetary Policy shows how central banks monitor and manage liquidity for creation of economic growth. The term liquidity shows the amount of money supply which includes cash, credit, checks and mutual funds. Along all these terms credit is an important concept which includes bonds, loans and mortgages. For example- In UK, the primary objectives of central bank is to reduce unemployment rate at least 6.5% and manage inflation. 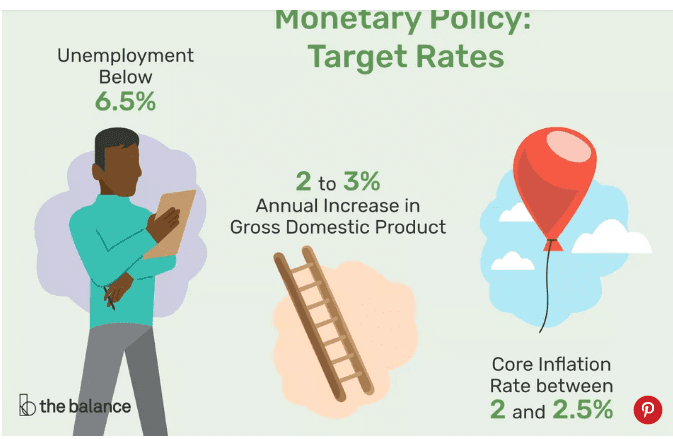 In UK, central banks use three main monetary tools – Open market operations, discount rate and reserve requirement. When financial institutions want to buy or sell securities from banks of other countries which add or reduce cash to reserves, then it termed as open market operations. While reserve requirement refers to keep reserve at central bank where low reserve requirement allows financial institution to lend more for deposits. Similarly, discount rate is third tool that banks charge from its members to borrow.In economic development, main role of monetary policy are:-

Adjustment between Demand and Supply for Money: Development of economy tends to rise demand for money. The main reason behind this is that corresponding contraction of particular sector will increase transaction demand for money. Along with this, rise in per capita income as well as increase in population also demand the same for carrying out their day-to-day operations. Therefore, in this regard, monetary policy plays an important role in economic development. As it minimises fluctuation in prices and economical activities by creating a balance between productive capacity of economy and demand for money.

Creation and expansion of Financial Institution: Through improvement currency and credit system of nation, monetary policy can boost up process of economic development. For attainment of this purpose, financial institutions and banks are needed to be established more. It will provide credit facilities and mobilise saving also. Thus, in this regard, monetary authorities help in establishment and expansion of financial institutions in rural and urban areas. As these policies aid in monetising the non-monetised sector as well as for capital formation, it encourages saving and investment.

Debt Management: It is one of the main function of monetary policy which aims at stabilising price rates, decreasing cost of servicing the public debt and more. Along with this, primary objective of debt management is to generate such conditions where rate of borrowing money by public, can be increased per year.

Monetary and fiscal policies refer as the most widely recognised tools used for influencing economical activities of a nation. In this context, monetary policy is mostly concerned with the supply of money and management of interest rates. Such functions are carried out by Central Banks of a country. In UK, central banks used monetary policies to check growth and stimulate an economy. Similarly, fiscal policies refer to a collective term for spending and taxation rates. These policies aim to target total spending and level of composition.

In pursuit of macroeconomic stabilisation, both monetary and fiscal policies play a prominent role. According to Irwin (2013), they believe that monetary policies have great impact on economical activities. While as per views of Jeston (2014), rather than monetary, fiscal policies influence much, as it plays main role in setting exchange and taxation rates. In UK, monetary policies are set by Monetary Policy Committee (MPC). They set base rates which is also known as rate of commercial banks borrow from central banks. Therefore, changing in base rate turn to influence overall interest rates of economy. It includes saving rates to mortgages and more. To determine whether inflation will rise or fall, MPC consider some main economic variables. It includes unemployment, exchange rate index, house prices, spare capacity in economy etc. For example- Expectation of higher inflation and growth, members of MPC will tend to increase interest rates. While to fall inflationary rate, they have to decrease or cut interest rates.

As shown from this figure, economy will face recession if inflation rate falling below target of government i.e. 2%. So, under this period, Monetary Policy Committee are likely cut interest rates. Thus, lower interest rates will make cheaper to borrow which encourage spending and investment as well. This will also lead to increase Aggregate Demand (AD) and growth rate as shown in mentioned figure. In addition to this, less interest rates also give various advantages like:

When inflationary rate is predicted to raise more than target then Central Bank increase interest rates. This will lead to increase cost of borrowing and reduce disposable income. So, it majorly affect growth in customer spending and reduce rate of economical growth and inflationary pressure.

This figure depicts that higher interest rates will lead to:-

Impact of fiscal and monetary policies on organisations:

By high rate of taxation, government can easily pull money out of economy which slows down the business activities of organisations. Whereas for stimulating economy, regulatory bodies use fiscal policies which might offer tax rebates or lower taxes as well. Therefore, it has seen that for improving real economy, fiscal policy (expansionary) is more effective. While, in terms of financial economy, better choice will be monetary policy (expansionary). But both types of policies create a large impact on organisations and individuals in many ways. It includes-

Business Cycles: Monetary and fiscal policies affect activities of business like cycle of expansion, recovery and recession. For example- When growth rate of economy is high then business organisations provide employment. So, this shows expansion phase of companies where spending rate of customers also increases. But in peak point of economy, rate of interest to stave off inflation increases. This will turn to reduce sales profitability ration which lead to shut down business of small or private companies. It arises high rate of unemployment also.

Impact of fiscal policies: It involves fluctuations in taxation rate and public spending policies where lower taxes shows high disposable income for customers. It also refers to more cash for organisations to make investment in jobs and machineries. In stimulating spending programs which involve improvement and development of infrastructure, drive business demand, as it creates short-term jobs. While increasing rate of income tax can decelerate as well.

We have a sample on Financial Management also

Thus, it has concluded from this discussion that for business environment, inflation refers to higher costs. While unemployment shows declining in sales and profitability because during inflation, mismatch occur between abilities required for a particular job and skills of unemployed workers. Therefore, in this context, monetary policies control inflationary period and fiscal tools measures demand of retraining unemployed labours. It helps in bringing up the level of unemployment down over long term.

From this presentation, it has concluded that both monetary and fiscal policies help in improving and developing economy of a country. Any changes in such policies will affects not only economy but also organisations which run their businesses over there and public spending as well.

Get assignment help from our experts!

Download Full Sample
Cite This Work To export references to this Sample, select the desired referencing style below:
Assignment Desk.(2022) Retrieved from: https://www.assignmentdesk.co.uk/free-samples/business-environment/introduction-to-business-environment
Copy to Clipboard