Organisational behaviour is an activity which is done by the managers of an organisation in order to study behaviour of individuals and the way in which they are interacting with each other. Main objective of this technique is to enhance effectiveness and efficiency of business enterprise. It is an study of employees performance which get influenced wile working in team or as an individual (Huczynski, Buchanan, and Huczynski, 2013). This report is based upon BBC who is broadcasting company and running its business in UK. Various topics are discussed under this report that are influence of culture, politics and power in the company, motivational theories and teams in an organisation. Organisational theories for better performance and productivity of staff are also e

P1. Influence of culture, politics and power in the organisation

Organisational behaviour is very important for an organisation to evaluate the behaviour of the employees. It is not possible for a company to survive without the staff and other departments who are liable to perform the operations (Pinder, 2014). BBC is facing the problem of harresment with female employees and gender inequality and has its own culture which has been followed by all its employees and it can be defined as Handy's organisational culture which is explained below:

Power culture: In organisations the power is in the hands of the managers they have all the authority to make judgements and all the decisions that are related to execution of business activities.

Role culture: It can be defined as the culture in which roles of every employees are predefined and they have to perform their duties according to them.

Task culture: It is followed by organisations when various issues are taking place and  company is not able to resolve them. Than teams are formed by the managers to resolve the same. Managers and leaders form teams of staff members and all of them have to follow the instructions of leaders to resolve the issues and enhance efficiency of the organisation.

Person culture: This culture is related to the employees who are more concerned with their work.

In BBC power culture is followed by the managers and all the power was kept by them. They decide responsibilities of each employee that depends upon the capability of them and provide them individual task so that, they may perform effectively and enhance their skills.

Influence of power on group and person:

Legitimate power: It is related to the power of the authority who are liable to take decisions (Pettigrew, 2014). In BBC such type of power is in the hand of managers of the company and employees have to follow their guidelines.

Reward power: It is majorly used to motivate employees by providing them monetary or non monetary benefits. It is implemented in order to increase the rate of employee engagement by admiring them for their good work and providing benefits.

Expert power: This type of power comes from the skills and knowledge of an individual that may help to find solutions for any type of critical problem. Managers and other concerned persons use this power to resolve issues that may affect the profitability.

Referent power: It is can be defined as the ability of influencing others. Executives can use this such type of power to motivate and influence their staff in order to enhance work quality.

Coercive power: It can be defined as the dictator nature of the mangers who force employees to follow their instructions. This power can be used by leaders of BBC to enhance productivity of employees who are very much of irresponsible.

In BBC coercive power was used by the mangers in earlier years and they always give instruction to the employees and they have to follow their guidelines. But currently the behaviour is changing and managers are dividing their powers and behaving more leniently with employees.

Political behaviour of Chanlat's in the organisation

Chanlat's political theory can be defined as the potential positive aspects of political conflicts that may arise in an organisation due to misconception at work place. In BBC there was a conflict among its employees which is related to their pay scale and gender. Managers are involved in politics and implementing the concept of divide and rule (Wilson, 2017). They are trying to create conflicts among staff members as pay scale was  different males and females. It has resulted negatively and employees are trying to leave BBC because of the wrong organisational culture. This can reduce productivity of employees and their willingness to perform their duties.

Analysis of power, culture and politics and its effect on BBC:

In earlier years BBC was facing various problems such as increased employee turnover,  harassment and pay scale problem for male and female employees as it was not same for both. Now the organisation have adopted a good culture to resolve all these problems. If company is having good and effective organisational culture that it helps to employees to be motivated and efficient toward their job roles (DuBrin, 2013). In BBC engagement of employees depends upon the decisions of management if their decisions are impressive than this may result in increased willingness of employees toward their work. This can help the company to attain long term sustainability.

P2. Evaluation of content and process theories of motivation

While an organisation is willing to motivate employees than content and process theories may result appropriately. In BBC Maslow's need hierarchy theory can be implemented as it is the best motivational theory. It is a part of content theory. For process theory Vroom's Expectancy theory can be adopted by managers of BBC so that organisation may lead toward development. Both the theories are explained below:

Content theory: Such type of theories are considered as the earlier theories of motivation. It can also be defined as the need theory in which managers are mainly focused with the requirements of employees (Bolino and et. al., 2013). In BBC Maslow's need hierarchy theory is applied as content theory to motivate staff. It has been discussed underneath:

Maslow's need hierarchy theory: Abraham Maslow, introduced the theory of  hierarchy of needs in 1940's. Maslow has explained the theory on the fact that employees have various needs and organisation should fulfil them in order to enhance business performance (Maslow's need hierarchy theory, 2018). Based on the some primary  needs of an workers, this theory  explain the basic needs of employees  with  the help of  five-stages: 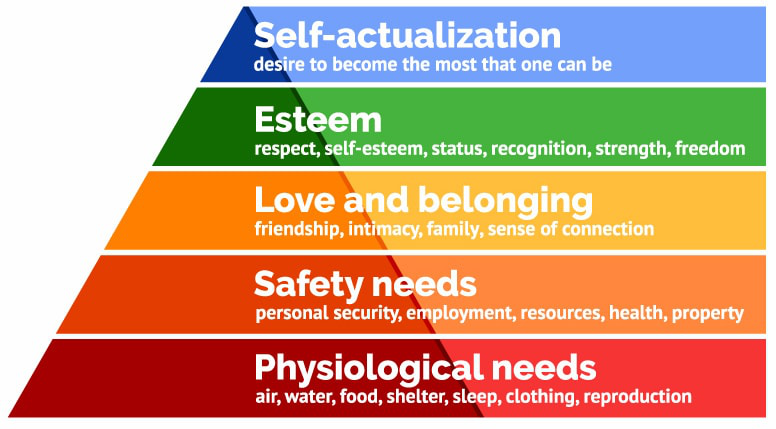 Process theory: It is is a system that may help to find ideas for development. It is mainly based on one or more independent variables. In process theory different theories can be considered by organisations. These theories are Vroom's expectancy, Adam's equity, Skinner's reinforcement and  Locke's goal setting theory. In BBC Vroom's expectancy theory can be implemented to motivate employees.

Vroom's expectancy theory: This theory is based upon three different motivational factors valence, expectancy and instrumentality. It defines that there is a favourable relationship between efforts and performance. Higher number of efforts can result in good performance. IN BBC this theory can be used to motivate employees by satisfying their needs. Three aspects of this theory are as follows:

Motivation is very important for an organisation as it may result in enhanced productivity and efficiency of employees. There are several other ways to motivate employees that are adopted by BBC. These are described below:

Healthy environment for employees: BBC is providing better working environment to its employees which helps them to perform all their duties effectively.

Commitment towards goals: Mangers of BBC should inspire their staff so that they become more committed toward goals. If company is also able to fulfil all its commitments that are made to employees than will motivate them for betterment.

There are various types of teams that can be formed by an organisation in order to achieve all its objectives. It is essential for a company to have different teams who can perform tasks in order to enhance productivity. All the teams are explained below:

Functional teams: These teams are known for their excellence and they are liable to keep track record of all the activities of the organisation. In BBC such type of teams are formed by managers to resolve all the short and long term problems so that organisation's effectiveness and profitability may get increased (Robbins and Judge, 2014). Functional teams are also responsible to bring exclusive viewpoint that may be overlooked by management.

Problem solving teams: This team is formulated to combining members who are from different departments of the company. All the members in such teams are properly trained and skilled, main role of the team is to find solutions of critical problems. It is formed in BBC to resolve all the carping issues in less time with the help of effective skills of managers.

Project teams: All the members of such teams belongs to different groups and also liable to perform separate functions. These can be divided in to sub teams according to the requirement of project. In BBC such teams are formed by managers to work on a particular task and when it is completed than team will be dissolved and new one will be formed for other project.

Virtual teams: It is a group of individuals who are form different geographic locations. Their communication is dependent upon fax, video or voice calling services. In BBC these teams are formed to make collaborative efforts upon different projects. IT services and computer software can facilitate these teams to communicate with members.

All these teams are very important for BBC as all of them can help to resolve all the problems related to business execution activities. If the company is having such type of teams than it may result in enhanced profits and productivity as all the issues are resolved frequently with the helps of team members.

Tuckman's theory: It is developed by Burce Tuckman in year 1965. There are five different models in this theory. These are forming, storming, norming, performing and adjourning. All these factors are very important to form an effective team. The explanation of them is as follows:

For effective team performance it is essential that organisation should motivate its employees so that their performance and productivity can improve. It can help the organisation to achieve its goal.

Participative leadership style: In participate leadership style, leader involve its staff in the decision making so that new ideas can generate. Leaders of BBC can use this style to motivate its employees so that decisions can be taken as per the wants of staff.

Effective leadership style develops the commitment in the employees to perform better. It encourage and motivates the staff to work efficiently so it helps to improve team performance and productivity of team members as well as BBC.

Bad Leadership: It can hamper the team performance of the organisation. In context to BBC, manager and leader is not able to leads its employees so that workers does not like the organisational culture of the company.

Communication: It is essential for the effective team performance in the organisation. In BBC, there is not good communication between the leaders and the employees so that employees want to leave the company. Workers focuses only there work and they does not much concern with goal and objectives of BBC.Buy Dissertation Help Online By the experts Of UK and Score Top grades.

From the above project report it has been concluded that organisational behaviour is a study of human behaviour of individuals at their workplace. It helps the managers to analyse efforts and practices of employees to attain organisational goals. For this purpose teams are formulated by managers and than tasks are divided among team members is order to accomplish tasks effectively.