It is very difficult to understand human behaviour. This is because human being change their behaviour according to situation. Human behaviour is the response of individual to internal or external stimuli (Hillson and Murray-Webster, 2017).The behaviour of humans is influenced by several factors such as culture, values and beliefs. Besides this, personality and traits is also an important element in this. There are various mystery involved in understanding human behaviour. This report will throw light on several theories that is given by scholars and psychiatrist. Also, it will reflect on evaluating theories

He gave theory related to children. The theory was based in attachment of children with their parents. In this theory he observed that children experience distress when they are separated from their mothers. Also, it showed that attachment can be characterised according to the behaviour of children (Daly and Wilson, 2017) A child is always connected to her mother in social, emotional and cognitive way. This creates a link between them. He further developed stages of development. 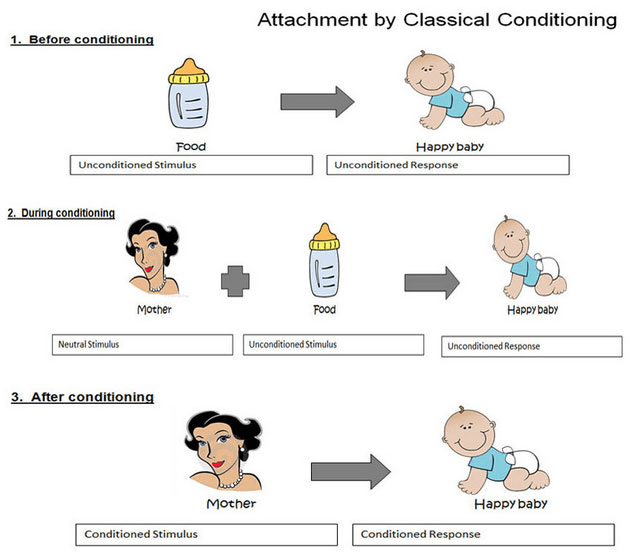 Attachment theory – it was developed by bowlby. In this he suggested that attachment is a set of learned behaviour. But the base for this is food. Children will always get attached first to the person who will feed him. Usually it includes mother that feed child. Then, infant learn to get associate with mother (Blake, McAuliffe and Wrangham, 2015) This will begin the process of classical conditioning. In addition to this, there are certain changes that occurs in behaviour such as crying, smiling, etc. It brings responses from others. Thus, by going through the process of operant conditioning infant learn to repeat those behaviours. Besides this there are three attachment styles that are secure, anxious avoidant insecure and anxious resistant insecure. This shows how attachment is formed at different levels.

But on the other hand, other theory of attachment states that children come into this world to form attachments. They are already prepared for this. Infant build social relation to develop behaviour such as crying and smiling. So it is concluded that attachment is developed by care not by food. Bowlby also stated that child only form one attachment and that help in exploring the world and surviving (Rodríguez and Calvo-Flores, 2014) This one attachment acts as prototype for all social relationship in the future. So if this attachment is disrupted it can lead to major consequences. At last it shows that there is a specific period for forming this attachment that is 0-5 years. The child may have reduced intelligence if attachment is not developed in this period.

Mary Ainsworth designed a structure to measure the quality of attachment. In this 8 stages was included that described showed relationship between mother and child (Mary ainsworth, 2016) The 8 stages are given below :-

From the above, it was found that there are three attachment styles. These are secure, insecure avoidant and insecure ambivalent. These styles description is as follows :-

Secure attachment- In this children are full of confidence and highly attached to their mothers. This helps in fulfilling their needs (Koelsch, Jacobs and Gebauer, 2015) In this infants develops a strong attachment when their needs are fulfilled.

Insecure avoidant – in this children are independent both physically and emotionally. They do not seek to have contact with attachment figure when distressed. These types of children are very insensitive and their needs are rejected by parents. Due to this they highly get emotionally distressed.

Insecure resistant – Here , child develops an uncertain behaviour towards the attachment. This is because of the surroundings. When they are in distress they are not comfortable in interacting. This behaviour results in inconsistent level of response to their needs.

This is concluded from strange situation that child attachment will be depend on how their mothers react or behave with them (Almeida, Rossetti and Coelho, 2017) Also, it depends on mother behaviour. There are two points in this :-

They both developed theories related to the personality of humans. It was based on Clark L. hull learning theory (Gwynne and Hulse, 2017) They showed learning process by using a S- R model of mental processes. According to Dollard and Miller human behaviour occurs in cues. A cue may be any stimuli.

Get dissertation help from our experts!

From this report it is concluded that behaviour of human depend in situation. It changes from time to time. The behaviour of human is influenced by several factors such as culture, values and beliefs. Human behaviour is affected by several factors. This brings change in their mental health. Also, it is said that child is always connected to her mother in social, emotional and cognitive way. This is concluded from strange situation that child attachment will be depend on how their mothers react or behave with them. Also, it depends on mother behaviour. Hence, it is behaviour of child will mostly be dependent on his mother. At last it is concluded that it is very difficult to understand human behaviour.

You may also like: Identifying Health And Diseases In Communities